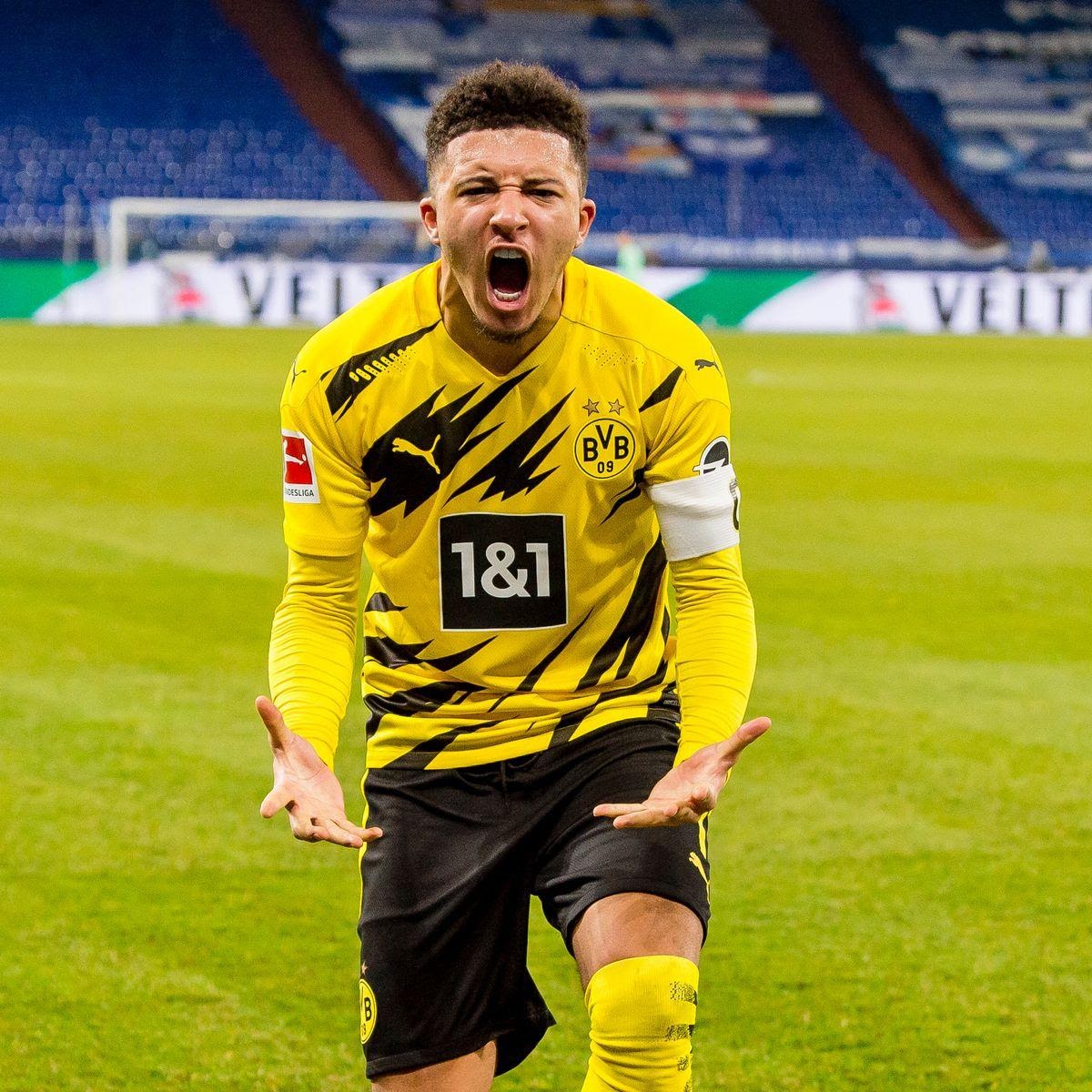 Second placed Manchester United were held to a goalless draw at Stamford Bridge on Sunday.

The result means Manchester City, who won a record 20th consecutive game in a row with victory at West Ham on Saturday are 12 points clear at the summit of the table, while Chelsea failed to leapfrog West Ham who keep their spot in fourth. 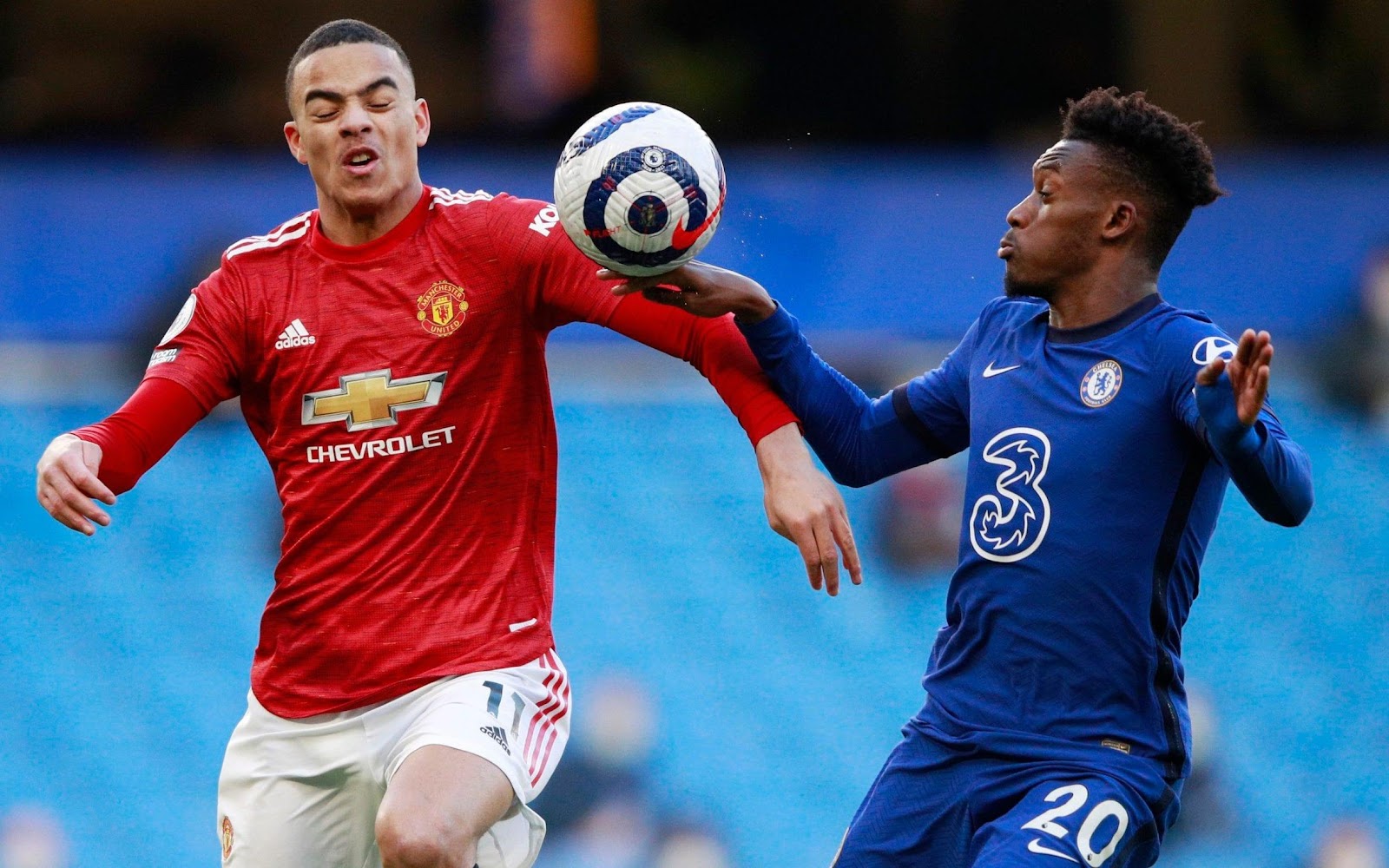 However, team captain Harry Maguire has told club officials that Luke Shaw misheard his conversation with referee Stuart Attwell, with Shaw believing the official to have said he would not give a penalty because it would cause “a lot of talk”.

Despite VAR calling referee Stuart Atwell’s attention to an incident that saw Chelsea winger Callum Hudson-Odoi handle the ball in the box, the referee decided to stick with his original on-field decision of a free-kick for the Blues.

Elsewhere Super Sunday, Arsenal were impressive away at high-flying Leicester after winning 3-1 to follow up their Europa League win over Benfica.

It was an afternoon to forget for the Foxes who crumbled to their sixth home loss of the season despite taking the lead through Youri Tielemens in the sixth minute, before David Luiz’s header six minutes before half-time brought the game level.

Alexander Lacazette then converted from the spot to put the Gunners ahead on the stroke of halftime and Ivory Coast International Nicolas Pepe doubled Arsenal’s lead seven minutes after the restart to seal victory for Mikel Arteta’s team.

The result leaves Leicester 10 points adrift of first placed Manchester City, while Arsenal move into the top half to ninth, eight points off the top four.

INJURY BLOW: Both teams would have wished things went differently. 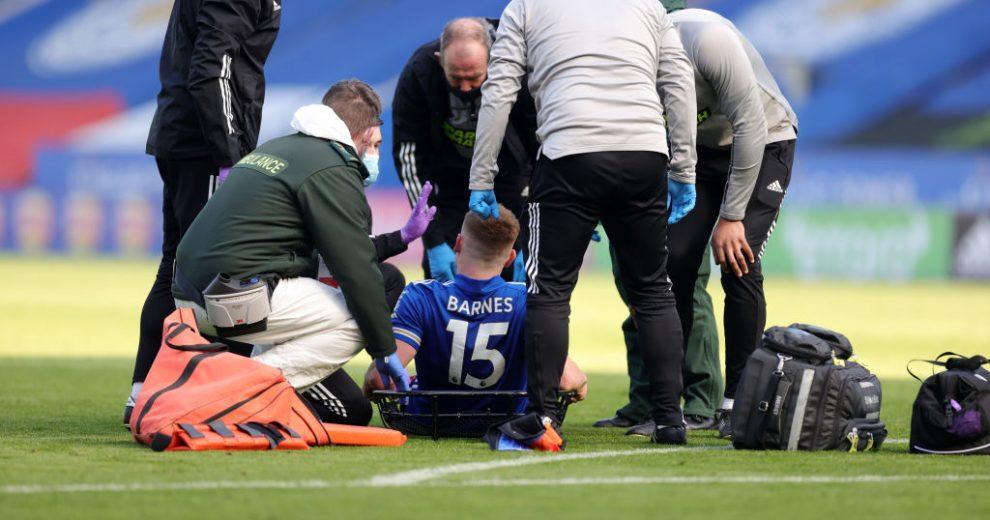 Arsenal attacking midfielder Emile Smith-Rowe was taken off injured, but it is Leicester who will be more aggrieved, with influential winger Harvey Barnes potentially facing six weeks out in the cold with his knee requiring surgery.

Liverpool got a much needed, morale boosting victory at Branmall Lane to end their 4-game losing streak ahead of Thursday’s date with Chelsea, in a potential top four decider at Anfield.

Young Scouser Curtis Jones opened scoring in the second half, after Aaron Ramsdale’s heroics in goal for Chris Wilder’s Blades kept the Reds at bay in the first, before Roberto Firmino had his shot deflected in by United defender Kean Bryan for Liverpool’s second.

Also on Sunday, Gareth Bale scored a brace and assisted another as Tottenham blew Burnley away in emphatic style at the London Stadium on Sunday, to keep alive their aspirations of playing in Europe next season. 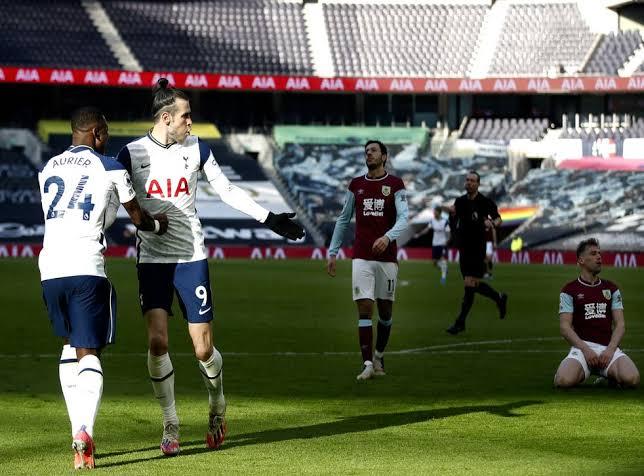 Spurs needed only two minutes to break the deadlock as Bale combined brilliantly with Son Heung-min for the opener, before the Real Madrid loanee released Harry Keane with a delicious long pass to double the advantage. Lucas Moura then converted Sergio Reguilon’s delivery for the third, before Bale struck again for the game’s fourth; combining again with Son, who left the Burnley defenders for dead before pealing through and feeding the Welshman who sent his effort into the far corner to seal a memorable afternoon.

Spurs are now up to eighth on the log with a game in hand, and six points behind fourth-placed West Ham.

Roeder led West Ham to seventh in the Premier League in 2002 before being diagnosed with a brain tumor in April the following year, requiring surgery and a period of recovery before returning to the dugout three months later.

He began his managerial journey at Gillingham before going on to be part of the Three Lions coaching staff during Glenn Hoddle’s spell as manager. His playing career started at Leyton Orient, before going on to represent Queens Park Rangers, Newcastle, Watford and Gillingham as a defender. He skippered QPR to their 1982 FA Cup final loss to Tottenham, and to the old Second Division title in 1983. Roeder was also a member of the Newcastle side that won promotion from the Second Division in 1984. 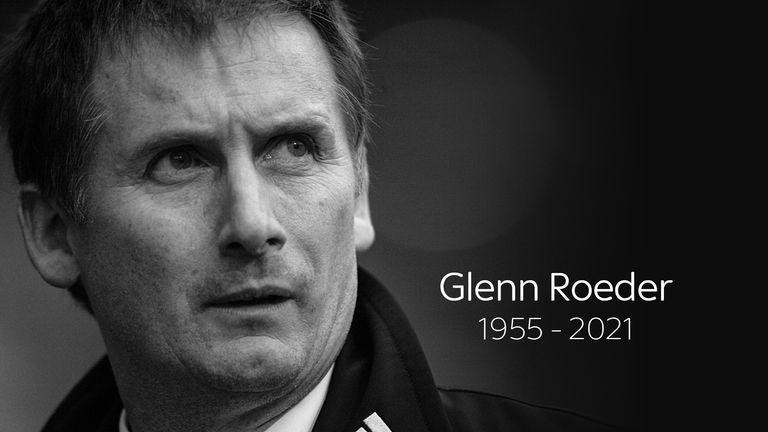 West Ham joint-chairmen David Sullivan and David Gold said: “We are both deeply saddened by the passing of Glenn, who was hugely respected and liked by everyone in the game.

As a player, Glenn enjoyed success with QPR and Newcastle, among others, before establishing himself as one of the country’s top coaches, with a well-earned reputation for developing young players, including the likes of Michael Carrick, Joe Cole, Glen Johnson and Jermain Defoe during his time with West Ham United.

Off the pitch, he was a loving family man and our sincere condolences go to Glenn’s loved ones at this sad time”

Romelu Lukaku continued his fine goal scoring form with a goal and an assist as leaders Inter Milan beat Genoa 3-0 at the San Siro on Sunday. 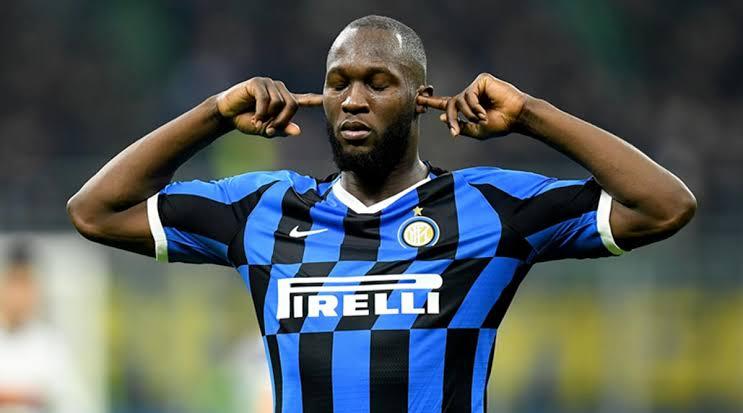 The Belgian opened scoring within a minute of kick-off to take his Serie A tally to 18 for the season, before setting up former Manchester United teammate Matteo Damian for the second.

Lukaku was also involved in the third as his saved shot was bundled over the line by another former United man, Alexis Sanchez.

Inter initially opened a 7-point gap on AC Milan, before the BIANCONERI beat Roma later in the day, courtesy of goals from FRANCK Kessie and Ante Rebic, to cut the lead back to four points.

Earlier on Saturday, Cristiano Ronaldo’s 19th goal of the season to maintain his spot on top of the Serie A scorers’ chat couldn’t inspire a win for reigning champions Juventus who were forced to a 1-1 draw by Hellas Verona, and now sit 10 points behind leaders Inter Milan.

Ahead of Wednesday’s Copa del Rey semi-final second leg clash, Lionel Messi went clear of Luis Suarez on the La Liga scorers’ chat with his 19th of the season. 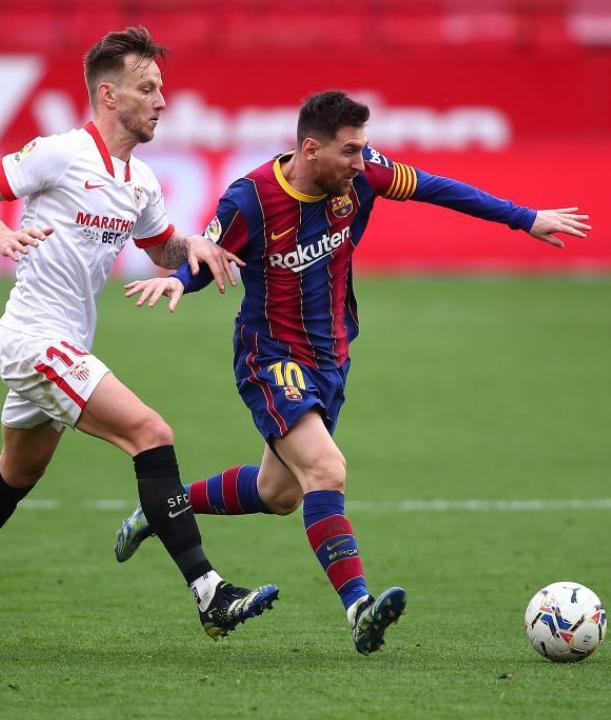 Messi assisted Ousmane Dembele for the game’s opener, before adding a second himself to keep Barcelona’s league winning ambitions alive, as Sevilla’s 10-game winning streak in domestic competitions came to an abrupt end.

Elsewhere, Leaders Atletico Madrid won 2-0 at Villarreal, thanks to an own goal by Villarreal’s Alfonso Pedraza and Joao Felix’s second half strike to go five points clear at the top of the standings.

Cameroon International Eric Maxim Choupo-Moting opened scoring, before Robert Lewandowski and Serge Gnabry scored a brace each in an emphatic 5-1 win over FC Cologne, as Bayern Munich moved two points clear of second placed RB Leipzig, who had to overturn a two-goal deficit against Borussia Monchengladbach to win 3-2. 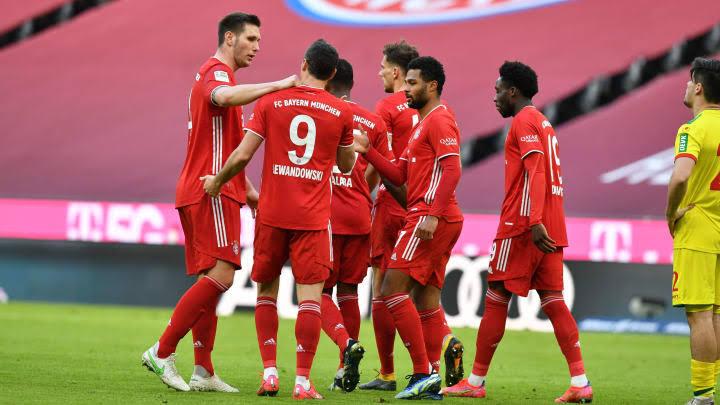 Polish striker Lewandowski is chasing Gerd Muller’s 1972 record of 40 league goals scored in a season, needing 12 more to add to his tally of 28 so far, with 11 games before the end of the season. 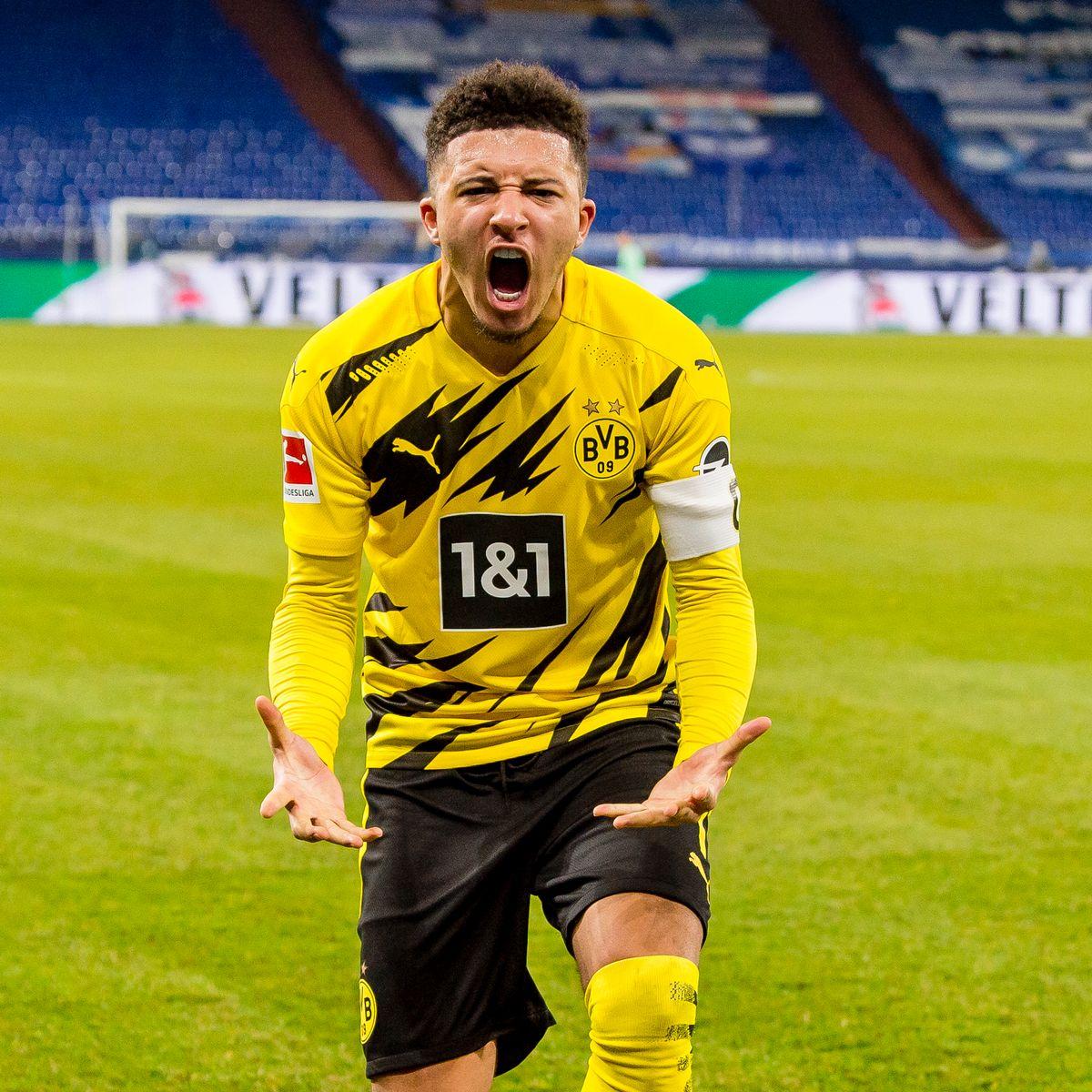 The South London-born prodigy, making his 99th Bundesliga appearance, laid the ball off for midfielder Mahmoud Dahoud who applied a fine finish from 20 yards out, early in the second half, before Sancho himself scored from the spot to double the lead, after a foul on Marco Reus in the box.

Reinier Jesus, on loan from Real Madrid, then added a third late on, after some unselfish play by Erling Braut Haaland to set him up.

Paris Saint Germain closed the gap on leaders Lille Metropole – who were held to a 1-1 draw by Strasbourg – as the capital club recorded a 4-0 win over the league’s bottom side Dijon on Saturday, with Kylian Mbappe bagging a brace to take his overall tally to 113 goals for the club. 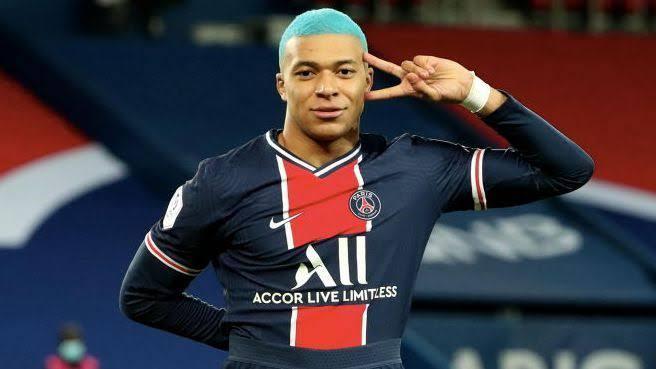 On loan Everton striker Moise Kean opened scoring early on, before Mbappe converted a spot kick and added another from a curling effort. Brazilian fullback Danilo then benefitted from Julian Draxler’s corner to head in the game’s  to cap a fine evening for Maurizio Pochetino’s men. 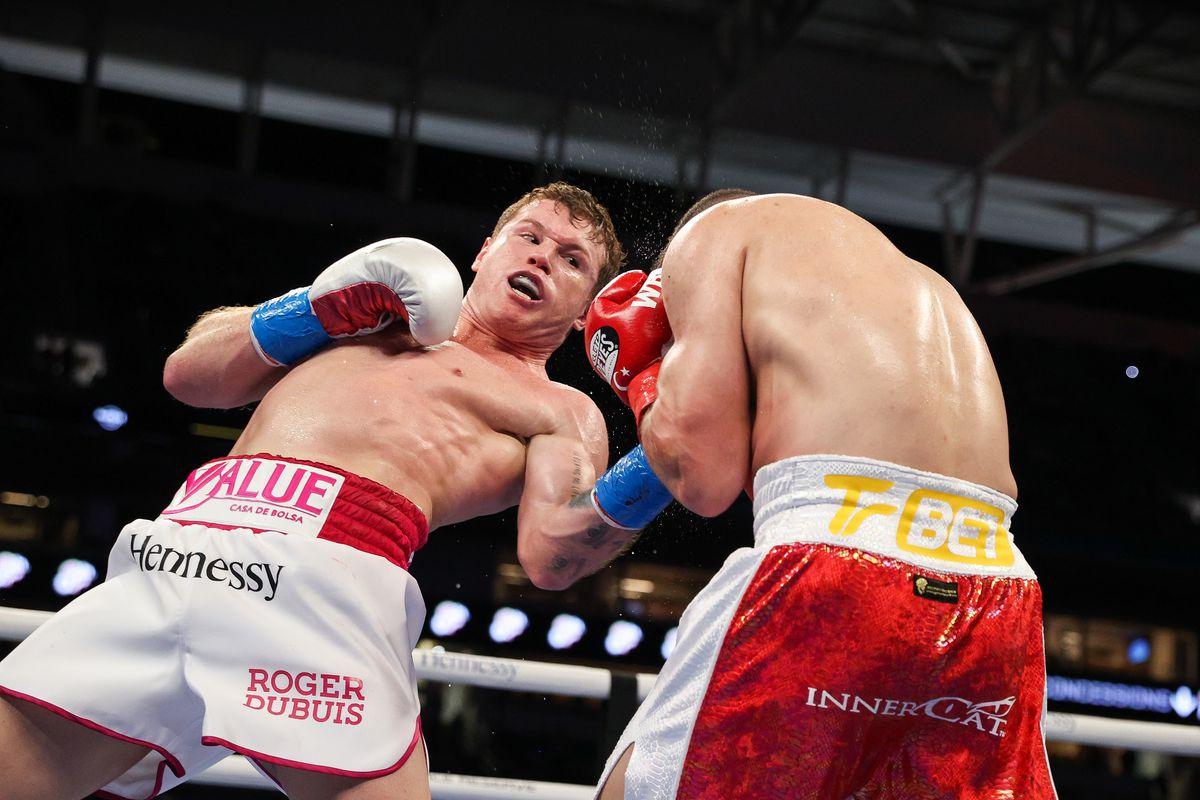 • Canelo Alvarez beat Avni Yildirim in front of 12,000 fans in Miami on Saturday night to set the tone for a world title unification bout with Britain’s undefeated Billy Joe Saunders. The fight is scheduled for May 8, with the WBA, WBC and WBO super-middleweight championships at stake.

• Tommy Fury landed a hammer of a right hand in round 2 to knockout Scott Harrison on Saturday night in London. The 21-year-old Love Island star is following the footsteps of older brother Tyson, as he looks break into the upper echelons of Boxing.

• Johnny Fisher hit Joe Joyce in sparring harder than even Anthony Joshua or Tyson Fury could, says his manager Sam Jones. ‘The Romford Bull’ exploded into the heavyweight division by twice flooring Matt Gordon in a first-round stoppage on his professional debut on the David Avanesyan vs Josh Kelly bill. Fisher is a university graduate with a rugby background who went to Las Vegas to spar Joyce when he should have been writing his dissertation.