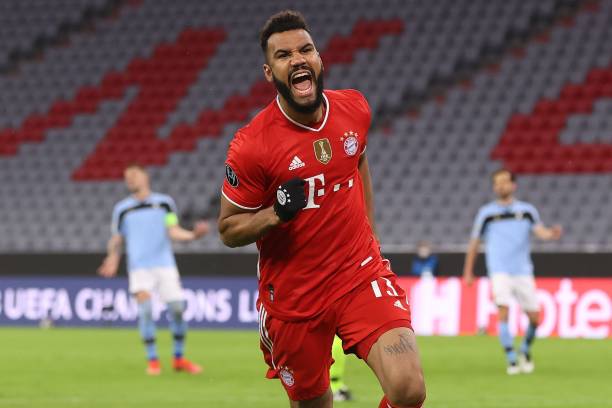 STAMFORD BRIDGE: Chelsea Do The Double Over Atletico To Qualify For Quarter-Finals

Hakim Ziyech and Emerson Palmieri were on target as Chelsea defeated Atletico Madrid 2-0 at Stamford Bridge on Wednesday to complete an impressive 3-0 aggregate win.

Thomas Tuchel’s men controlled the game from the blast of the whistle and eventually got their reward when Morocco International Ziyech broke the deadlock in the 34th minute.

The La Liga front-runners eventually grew into the game and started to pose questions, especially from counter attacks, but Chelsea continued to hold their nerves and made a tactical substitution when bringing on Emerson and Ben Chillwell in place of Marcos Alonso and Kai Havertz an attempt to provide defensive cover on the left side, only for Emerson to score with his first touch of the game to take the game beyond Diego Simeone’s men.

The win means Chelsea preserve their record of never having faced elimination in a European knockout tie in which they had won the first-leg away from home (14-0), and the frustration got the better of Atletico in the closing stages as defender Stefan Savic got himself sent off after appearing to elbow Antonio Rüdiger in the chest. He faces the prospect of a potential ban after exchanging strong words with the referee and taking several minutes to vacate the pitch.

Elsewhere on Wednesday, reigning champions Bayern Munich dispatched Lazio 6-2 on aggregate (2-1 on the night) at the Allianz Arena to book a place in the Champions League quarter-finals for the ninth time in the last 10 attempts.

Polish superstar Robert Lewandowski bagged the game’s opener from a 33rd minute penalty to register his 39th goal of the season in all competitions, before the man who came on to replace him at half-time, Eric Maxim Choupo-Moting, stabbed in a second in the 73rd minute.

The cushion goal scored by the Cameroonian proved to be decisive as Lazio pulled one back through a header by Marco Parolo to set up a nervy finish for the Bavarians.

Manchester City continued their impressive run in Europe this season with a comfortable 2-0 win in the second leg of their last-16 tie against Borussia Monchengladbach, making it 4-0 on aggregate.

Goals from Kevin De Bruyne and Ilkay Gundogan inside the opening 20 minutes were enough to see off Gladbach, with the Premier League runaway leaders now focused on Friday’s quater-final and semi-final draw as they target a first ever European title.

Goals from Karim Benzema, Sergio Ramos and Marco Asensio inspired Real Madrid to a place in the Champions League quarter-finals, defeating Atalanta 3-1 on the night and 4-1 overall.

With Real holding on a slim 1-0 advantage from their visit to Bergamo in the first-leg, Atalanta had hoped to get on the score sheet early but it was Benzema who broke the deadlock in the 34th minute to give the home side the initiative.

Captain of the side Ramos added a cushion goal from a penalty, before Luis Muriel halved the deficit from a direct freekick, before Zinedine Zidane’s men got a third through Marco Asensio to settle the tie.

With Lazio also losing on Wednesday, it means that no Italian sides will be in the hat when the Champions League quarter-final and semi-final draws are made on Friday.

Paul Pogba and Donny van de Beek have traveled with the Manchester United squad heading to Italy for their Europa League round-of-16 second-leg tie at San Siro on Thursday.

French midfielder Pogba, who has been out of action since suffering a thigh strain on February 6 in a Premier League game against Everton, could be important for Ole Gunnar Solskjaer’s men tonight as they look to withstand the pressure of conceding an away goal.

Goalkeeper David de Gea is expected to return to the starting line up for this game having returned from paternity leave in Spain, but Anthony Martial, Eric Bailly, Edinson Cavani and youngster Shola Shoretire have not made the plane to Milan.

AC Milan on the other hand, will be able to call on former United striker Zlatan Ibrahimovic for this clash after missing him through injury for the first-leg in Manchester.

The Rossoneri will also be boosted by the return of Turkish attacking midfielder Hakan Calhanoglu, as well as French World Cup winning left back, Theo Hernandez.

In the night’s other games, Arsenal will host Olympiacos looking to consolidate on a 3-1 first-leg win, Tottenham will play away at Dinamo Zagreb holding a 2-0 first-leg advantage, while Rangers will welcome Slavia Prague

New Barcelona President Joan Laporta has promised to convince team captain Lionel Messi, 33, to stay at the club beyond the expiration of his contract in the summer, while also assuring team gaffer Ronald Koeman that he has got the club’s long-term backing to continue his revolution at the Catalan giants.

South Africa’s Orlando Pirates left it late against Nigeria’s Enyimba on Wednesday, with a late goal scored by Tshegofatso Mabasa the difference as the hosts ran out 2-1 winners.

Daniel Hotto drew first blood for Pirates with a tidy finish, but Enyimba responded when the referee awarded a penalty, converted by Austin Oladapo, before Mabasa came through with the winner deep into additional time.

All 40 clubs from the top two divisions of French Football have unanimously agreed to not release their players for games to be played outside of the European Union, as a result of the mandatory isolation period they would be subjected to on their return to France due to fears of Covid-19 transmission overseas.

With the African Cup of Nations qualifying games hitting crunch time, African organizers have not followed the footsteps of their South American counterparts who last week postponed their version of qualifiers for the World Cup.

A statement released by the Ligue de Football Professionel said: “In the absence of an exemption for foreign international players made available to their national team, and in view of the response times imposed by international regulations, the clubs of Ligue 1 and Ligue 2 have decided to unanimously apply the Fifa circular of February 5, 2021 taking into account the many travel restrictions in the world”.

“In this context, the clubs will not make available for selection the foreign players summoned for matches outside the EU / EEA zone during the next international period in March.”

There are two more rounds to be played between March 24 and 30 to determine the 24 teams who will qualify for next year’s African Cup of Nations in Cameroon.

A 3-0 victory over Sporting Braga in January saw SL Benfica clinch their first ever Portuguese Women’s League Cup since its launch two years ago.

The Tokyo Olympics has suffered yet another setback, with creative chief Hiroshi Sasaki vacating his role after remarking that a female comedian, Naomi Watanabe, could wear a pig costume at the opening ceremony and appear as an “Olympig”.

The incident comes after former Olympic Games President Yoshiro Mori was forced to resign after being found guilty of sexist remarks.

Hiroshi has since apologized and concedes that his utterances were “a huge insult” to her, but Ms Watanabe, at the moment of writing this, has yet to respond.

“There was a very inappropriate expression in my ideas and remarks. I sincerely apologize to her and people who have felt discomfort with such content,” read a statement released by Mr. Sasaki through the Olympics organizing committee.

33-year-old Ms. Watanabe is one of the most famous comedians from Japan. She has gained a strong fan base making content around celebrity impersonations while also being a huge advocate for the issue of body positivity.

The not-so-linear Boyfriend by Ckay review

It’s Goal no.5 for Osimhen!