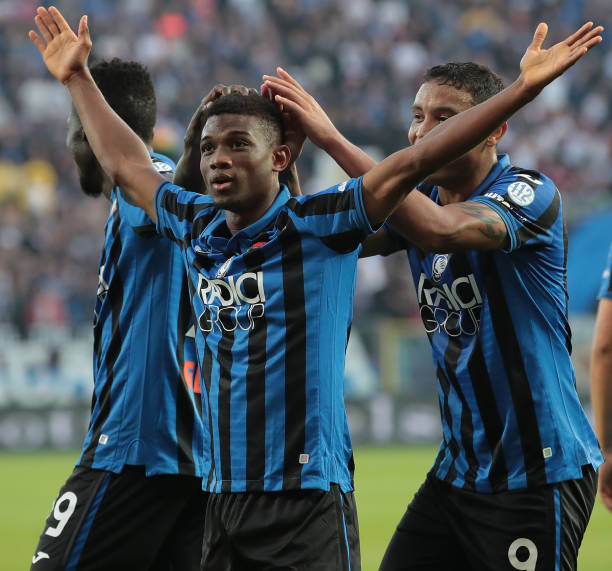 All the Action Attraction from the Europa League on Thursday Night

OLD TRAFFORD: Manchester United surrendered the lead as AC Milan capitalized on a defensive mix-up, deep into injury-time, to tie the game 1-1 in their Europa League last-16 first-leg tie under the lights at Old Trafford on Thursday.

United took the lead five minutes into the second half when former Atalanta starlet Amad Diallo, on for Anthony Martial at half-time, combined superbly with Bruno Fernandes to score his first goal for the club in only his third appearance.

But Milan, having had what seemed like a legit goal by Franck Kessie harshly ruled out for handball and on the brink of losing, finally restored parity through Simon Kjaer who guided a free header at the near-post past Dean Henderson to make it 1-1 heading into the return-leg in Milan.

The home side took the lead just six minutes from kick-off through Nicolae Stanciu, who lashed on to a pass from Nigerian striker Peter Olayinka to  score the opener.

Slavia continued to dominate possession but it wasn’t long before the Gers found a way back through Filip Helander, who collected a pass from Ianis Hagi to slot home the equalizer before half-time, registering a crucial away goal for Steven Gerrard’s men ahead of next Thursday’s return leg at Ibrox.

TOTTENHAM HOTSPUR STADIUM: Harry Kane’s brace made the difference for Spurs as they saw off Croatian side Dinamo Zagreb 2-0.

Jose Mourinho’s men put one foot in the Europa League quarter-finals with a solid display that saw talisman Kane open the scoring in the 25th minute from a rebound, before drilling home a low finish in the 70th minute for his second of the night to put the North Londoners in strong control of this tie.

KARAISKAKIS STADIUM: Ahead of this weekend’s North London Derby, Spurs’ eternal rivals Arsenal also warmed up with a 3-1 win at Olympiakos.

Martin Ødegaard opened scoring for the Gunners who took their advantage into half time, but a mix-up in the second half involving goalkeeper Bernd Leno and substitute Dani Ceballos was punished by Youssef El-Arabi to restore parity, before Arsenal bounced back to seal a win courtesy of goals from two unlikely sources; Gabriel and Mohamed El-Neny.

Swiss icon Roger Federer has called time on the second stage of his comeback tour after making a decision to prioritize training over match play.

After facing more than a year out through injury, Federer beat British No. 1 Dan Evans in Doha, before falling to a narrow defeat against Nikoloz Basilashvili on Thursday.

He was due to be part of next week’s Dubai Duty Free Tennis Championships but unsurprisingly, he has decided against playing in back-to-back weeks at the start of his comeback.

Federer posted on social media: “It’s been great to be back on the ATP Tour, loved every minute playing in Doha once again.

“A big thank you to the best and loyal team that helped me get here.

“I’ve decided it’s best to go back to training and as a result, I’ve decided to withdraw from Dubai next week.”

Having already pulled out of this month’s Miami Open, Federer’s next competitive appearance will most likely be on clay as he looks to attain full fitness in anticipation of the grass-court season.

Dillian Whyte has hailed Lennox Lewis as the greatest British heavyweight of all time, and looks up to the unified champion for inspiration as he targets a revenge victory in his upcoming ‘Rumble On The Rock’ rematch with Alexander Povetkin on March 27 in Gibraltar.

“He came back from his two defeats and won both the rematches, and how long he reigned. There was a period in time when no one could touch him.

FIFA and the new changes in football

“He was destroying dangerous guys. Destroying them in seconds.

“Just the way he fought, his fighting style and his aggression.

“Look at the guys that he was beating,” he concluded.

Whyte is clearly unfazed by Tyson Fury and Anthony Joshua, who are expected to contest to unify the major world titles later this year after singling out Lennox, a former champion, when asked about who he regards as the greatest British heavyweight of all time.

Boxing fans might have to wait a bit longer to see two of Britain’s top heavyweights in action after Tyson Fury cast serious question marks over the possibility of a summer bout with compatriot Anthony Joshua, insisting the fight is “nowhere near” being finalized.

The Gypsy King claims he has quit training and has been drinking up to 12 pints of beer a day, while both fighters’ promoters continue negotiations for what could be the biggest heavyweight unification showdown in the history.

The 32-year-old Fury also ruled out a return to fight in the United Kingdom, insisting he plans to finish his career in Las Vegas.

“Until I’ve got a date and a load of money in my pocket, there’s no fight,” said Fury.

“There’s a lot of things going on that people don’t know behind the scenes that can scupper a fight like that. We’re nowhere near at the moment.

“I’ve stopped training now, I’m on holiday. I’m doing anything between eight to 10 to 12 pints of lager a day at the minute – I’m not eating though, so I’m just getting my calories through alcohol.

“Do I think the fight will eventually happen sooner or later? Yes. It has to happen. But do I think it’s imminent? No. I’m not going to hold my breath for it.”

Fury’s last fight was over a year ago when he beat Deontay Wilder to claim the WBC title, and he is not ruling out the prospect of a trilogy with the Birmingham Alabama native should his camp and Anthony Joshua’s fail to strike an agreement.